I Feel Unsafe Here! How to Embrace Conflict 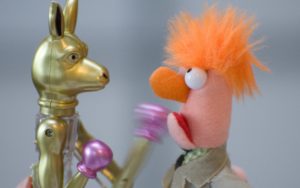 Photo by Frank Busch on Unsplash

Millennials get a bad rap for snowflake-like sensitivity and delicacy. It’s impossible to criticize anything a Millenial says or does – so the story goes. They’ll call you out on it and accuse you of creating an unsafe space.

Millennial or not, sometimes it feels like it’s impossible to respectfully and constructively disagree with anyone at work. We tiptoe around each others’ feelings. We’re too uncomfortable to state an opposing viewpoint for fear of getting called out on “safety.” Our ability to do great work together suffers.

Nowadays, the term “psychological safety” has come to be (mis)used as a trump card to play in environments where people don’t know how to disagree constructively with each other. “I don’t feel safe” is a magic wand that protects you from any form of disagreement or potential conflict. You better be quiet or change the subject, or I’ll tell the boss. I might even expose you as a harasser on Twitter and Instagram – not because you are doing anything mean, but because I want to avoid any possible pain or discomfort that might come from continuing the conversation.

For sure, harassment and abuse of power really do happen. Let’s call out real harassment and abuse – it would be irresponsible and dumb not to (and I would never do anything dumb on purpose). But let’s not confuse harassment and abuse with disagreement and hurt feelings – this is detrimental to working well together. The ironic thing is, it’s only when we do have psychological safety and high levels of team emotional intelligence that we can be confident in critiquing each other’s work and ideas constructively. And critiquing each other’s work and ideas respectfully and constructively create safety.

The reason we collaborate in teams is so that we can create new things and produce outcomes that are greater than whatever we might be able to do individually, so we can make amazing things together. We each bring different talents and experiences to the party, as well as different perspectives and opinions. Greatness comes from that tension, the friction between teammates with differing ideas, in the form of group creativity. Sparks of pure genius ignite from the kindling of the ideas we share with each other. We grow as individuals when our thinking is probed and challenged – which is why in academia, we have oral cross-examination and peer-reviewed papers. It’s about critiquing the idea, not the person behind it, to shape the best possible outcome.

There’s a protocol for that

The Core Protocols offer us powerful tools for learning together and applying effective ways to communicate when there’s disagreement. They are tools that guide us toward improvements in what we’re working on while protecting the integrity and safety of everyone involved. For example, the Investigate protocol puts the creator in control of the process, inviting others to contribute their thoughts by asking thoughtful questions. Or the Perfection Game protocol, which biases teammates toward offering ideas that will make our work artifacts better than they already are.

This separation of the artifact from the person who created it is one of the traits that make this toolset psychologically safe. It aligns both parties together with the common goal of a great outcome rather than opposing each other adversarially. It’s the principle expressed in the first Core Commitment – we will get behind the best idea on the table, rather than stubbornly defending our own baby.

Similarly, the protocols of being opted-in and checked-in make it incumbent on us to speak up when we spot potential room for improvement rather than avoid giving honest feedback because we’d rather not risk hurting feelings or making the other person uncomfortable. Instead, we can express ourselves constructively and with a positive, abundance approach – here’s an idea to add on, to make this thing even better. “Yes! And…”

Tools like this help us get comfortable with the creative abundance of difference. We open up to the input of others, and we welcome divergence, getting used to conflict as non-threatening and valuable.

And if we’ve lost the ability to do this in our teams, then it will take some practice to get back in our groove.

You can build healthy conflict resolution habits in your team by practicing on low-stakes disagreements. For example, what’s your favorite afternoon beverage? I bet it’s different from mine, and it’s OK if we disagree about it – it’s not a big deal. My favorite afternoon drink is an Americano made with one shot of espresso, and it has to be exactly eight ounces of hot water overall, in a ceramic cup, and it better be hot. That’s too specific for you? Or you prefer tea or plain old water? Let’s just talk about it. Ask me a few questions. Make believe you want to learn more about me, my idea, my preference. The more you ask, the more you’ll understand me, and we’ll be able to resolve important conflicts more easily in the future.

I use a training activity when I teach this in my classes. I ask students to help me plan a big event, the annual Epic Agile Party. For learners, it’s a fun game – it’s not their event, they’re just giving me advice, there’s nothing at stake for them. I teach them how the Decider and Resolution protocols work, and I challenge them to see how many decisions they can make together in two minutes. There’s always disagreement. The tools help them rehearse hearing each other’s differing ideas and safely resolving conflict. They get to experience resolving disputes safely, a practice they can later use on topics they care about in their real work. (Plus, I get great ideas for the party!)

When disagreement gets dangerous, everyone loses

The opposite is also true. In toxic work environments, no one feels safe to voice an opinion that diverges from the majority view. You’re not allowed to step outside the well-trodden patch of safe turf in the middle.

An unsafe lower performing team is like a souring relationship (in fact, it is a souring relationship!) where the number of off-limits topics steadily grows, and we limit our conversations to the smallest subset of topics that won’t trigger an argument. Emotionally unsafe work environments shut down creative contributions and nascent innovations. Our work together ends up being far less than any of us could have accomplished individually. Low safety environments limit creative potential to the tiny intersection part of the Venn diagram of ideas, blocking off the interesting territories to be explored in the much greater union zone of the Venn diagram, which includes all the ideas in the universe.

Embrace disagreement – this is where our group creativity and genius emerge. Create real safety with tools like the Core Protocols, and learn to harness that creativity and genius. The intelligent use of the divergent and creative ideas within our teams facilitates remarkable team performance – free of groupthink and lowest common denominator restrictions. And it just plain feels good to be part of a team like that. 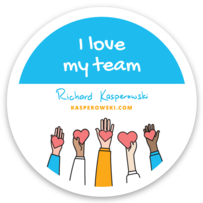 By the way, have you seen my awesome new laptop stickers? With themes like, “I love my team,” “My team is Agile,” and “Teamwork is the work,” it turns out they’re quite popular! Make sure you pick one up the next time you see me at a conference or event. And thank you, Sticker Mule, for the fast turnaround and great quality!