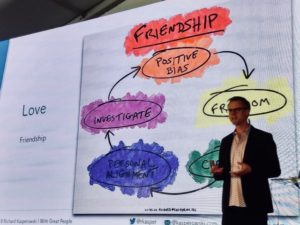 Many great writers, artists, and philosophers have tried to define love over the years. They’ve all approached it from different perspectives and produced some interesting answers.

I won’t compete with the romantics here. My interest is in workplace relationships and teams. After working for so long with the Core Protocols and observing teams that have high levels of psychological safety and team emotional intelligence, I see something.

Or if you prefer, I see a consistent pattern of behaviors within a group that include: 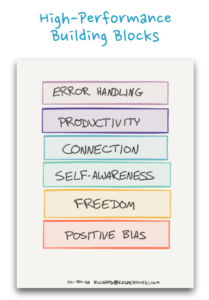 I often draw it as a stack of building blocks, or for my techie friends, as a protocol stack. As far as I know, neither Plato nor the poets approached it like this. But bear with me. Love is about what you do—your behaviors.

That means  you can “fake it ‘til you make it.” You can adopt the behaviors in the Core Protocols and communicate and engage as if you have this mutual concern and respect for one another. And when you intentionally practice and hone these behaviors, love emerges.

When people are personally committed to working and acting in a way congruent with their truth and inner alignment, they find a context where being part of a great team is achievable. They don’t settle for a poor experience. If you believe you can produce and create greatness, go and make it happen, or find somewhere where it can happen.

When you find it, you’ll know. When I observe teammates collaborating effectively, even without hearing their words, I see patterns that look like love. Try it yourself. Watch a high-performing team. You’ll notice that they behave as if they care about each other, that they ask for and offer each other help, that they both smile and frown together.

You don’t have to call it love if that’s a word you would never use in your workplace or organization. Some groups even struggle with words like friendship. So use whatever word works for you and your team.

And maybe you could use the word love with your team. You can shift your team culture with the help of conscious leadership commitment. There might be structural issues to look at first. For example, incentive alignment: has healthy competition within a team devolved to a point where ruthless rivalry is what gets rewarded? That’s unlikely to foster the positivity and abundance thinking that has been proven, over and over, to create measurable high performance. Could it be as simple as creating targets as a team, rather than as individuals?

Some poorly functioning teams become toxic because of cultural differences between team members and confusion around expectations. It could be inexperience relating to people from different generations, ethnicities, abilities, or genders. And those with such intrinsic insecurities are least likely to be comfortable with the four letter word love, certainly at work.

Such workplaces might even seek to regulate interpersonal relationships between team members, as if that were a management matter.  As a society, we certainly have a preoccupation with romantic love, which we conflate with physical attraction. If people want to be friends, let them! Gallup even includes assessments of love or friendship in their Q12 diagnostic of employee engagement:

Are you worried about this love word being abused as an excuse for misbehavior? Again, I’m not talking about romantic love. I’m talking about brotherly or sisterly love—strong connection and friendship. Start from a perspective of mutual respect and concern, that the other person’s peace of mind and wellbeing is as important to you as your own. Then all anxieties around boundaries and appropriateness can evaporate. When your team shows true love for one another—or whatever word you use for it—each person’s need to feel secure, accepted, and integral outweighs everything else. We come to value each person’s truth, voice, and point of view, equally.

In some cases, this means deliberately giving away power. Whether from inborn privilege, role, authority, or perceived expertise, sometimes the most loving act possible is to empower each other.

To reclaim the toxicity pervading some elements of our culture, adopting the Core Protocols and Commitments is an easy way to bring back mutual regard and respect, to guide each other toward friendship and higher performance.

Want help introducing these behaviors to your team? Ask me for help any time.