Playing well together is important: communicating, learning, sharing, getting things done. Our native culture shapes how we think, how we behave, and how we perceive our coworkers.

Geert Hofstede is a master of understanding culture. In his book, Culture’s Consequences, 2nd ed., he shares the data and analysis of many years of research on national cultures. Hofstede defines culture as “the collective programming of the mind that distinguishes the members of one group or category of people from another” [p. 9]. 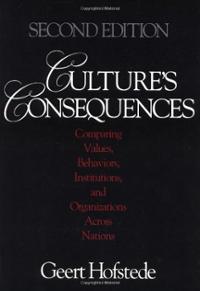 Like an economist, Hofstede analyzes the data he has collected, factoring out variables that have no independent influence on culture. He identifies five orthogonal dimensions that he uses to characterize a country’s culture:

Here’s a brief overview of each dimension and its importance to me, as a manager in a multinational company.

Power distance (PDI)
Definition: “The extent to which the less powerful members of institutions and organizations within a country expect and accept that power is distributed unequally.”[p. 98]

What it means for me, as manager of a culturally diverse team:
As an American, I exhibit relatively low power distance. Be aware that Finns exhibit almost no power distance–we are all equals–while Indians and Turks expect and express large power distance–they may be afraid of and deferential to me.

Uncertainty avoidance (UAI)
Definition: “The extent to which the members of a culture feel threatened by uncertain or unknown situations” [p. 161]

What it means for me, as manager of a culturally diverse team:
As an American, I prefer and embrace ad hoc. Be aware that this is counter to the expectations of French, Turkish, etc., who prefer formalized policies and procedures.

Individualism stands for a society in which the ties between individuals are loose: Everyone is expected to look after him/herself and her/his immediate family only. Collectivism stands for a society in which people from birth onwards are integrated into strong, cohesive in-groups, which throughout people’s lifetime continue to protect them in exchange for unquestioning loyalty.

What it means for me, as manager of a culturally diverse team:
As an American, recognize my extreme individualism. Try hard to empathize with everyone else, who all exhibit stronger collectivist bonds than me.

Selected ranking, from greatest to least (this index has the smallest list of countries) [p. 356]:

What it means for me, as manager of a culturally diverse team:
As an American, recognize that I have more of a short-term orientation than my Asian coworkers. They might view my decisions and advice as thoughtless and counterproductive to long term success.