April Jefferson: How to Achieve Greatness Through Imagination and Fun?

April Jefferson: How to Achieve Greatness Through Imagination and Fun?

In this episode, Richard interviews April Jefferson. April is a coach, facilitator, and speaker. She currently serves as a board chairwoman at the Design Action Lab. We talk about achieving happiness within a team and among customers through innovation, improvisation, and having fun! When you finish listening to the episode, connect with April on LinkedIn and Twitter and visit her website at https://soulcraftswoman.com. 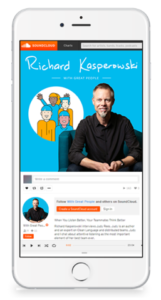 Richard (00:12):
Hi, friends. Welcome back to With Great People, the podcast for high-performance teams. I’m Richard Kasperowski. Building a great team is like cooking a great dish. If you follow a good recipe, the results will be, well, good. But if you want exceptional results, then you need to do something extra. You have to experiment, you have to improvise, you have to see what secret spice best fits your ingredients. In this episode, I talk with April Jefferson, a coach, facilitator, and speaker, about achieving happiness within your team and amongst your customers through innovation, improvisation, and having fun. To support this podcast, visit my website, kasperowski.com.

Richard (01:07):
Oh, it’s my pleasure. Will you introduce yourself to our listeners?

April (01:10):
Sure. Not much to say about little old me. I’m April Jefferson. I’m coaching around like many of our other friends in this community, and I really have a heart for people, so maybe we’ll talk a little bit about people in our time together.

Richard (01:30):
Yeah. Before I just came here to meet, I just mentioned I was with my son at a café, and I was describing you to him, and that’s kind of what I said, that you have a great big heart. So this is the podcast about teams. High-performing teams, best teams that people have had their lives. What’s the best team that you’ve ever been a part of in your life? And I have a really broad definition of teams here, any group of two or more people aligned with a common goal. So it could be a work team, it could be a family thing, it could be friends. Just any group of two or more people. What’s the best one of those in your entire life?

April (02:09):
Wow. One of the best teams I’ve had of a group of people, I would say it was in my first foray into what we call agile. That was before scrum and all that. Really we just took an XP book and read it, and experimented and tried to start doing it. And I’ve found for myself that was the best experience I’ve had. And I look to a lot of that on how we learn and how we experimented, and the things that we tried and the results that we had, we went from having a product that people hated and could depend on the releases… we were definitely delivering often, but the reliability of those releases were not something to be proud of. People would wait… “Well, let me wait a few more before I would install that,” to actually starting from scratch and getting rid of a hodgepodge solution, and really involving deeply the customer in all aspects. And they were really happy, so that was one of the best teams that I had. It was really no drama.

April (03:52):
Yeah. I know a lot of people with a similar story. That’s why I call shenanigans when people say, “Scrum is the training wheels,” or that type of thing. I’m like, not really. I’ve learned other things. So we all have different experiences. That’s the biggest thing I would say to understand, is how those experiences manifest can be different for others. And one of the things that I don’t get into is the drama on LinkedIn and Twitter about process, because that’s really irrelevant. And what’s the best way to achieve these outcomes, because there’s multiple ways. There’s not one way. And we share our stories to have understanding of what’s possible. And I look at it as a recipe. When I think about making something new, I research lots of recipes, and I figure out what ingredients that I want to use. That’s what I would say. Everyone’s journey can look like lots of possibilities, and some things are successful, and some things not so much. But we learn from it.

Richard (05:02):
Yeah. I giggle now. I made some soup this afternoon, and it doesn’t follow my wife’s recipe. So I’m giggling about, “What’s she going to think about this recipe that I invented?”

April (05:15):
It can be quite interesting things, I’ve heard, “No.” You see it all the time, like, “What are you doing? You’re ruining it.” And then, “Oh, that’s surprising. I’ve never tried that. What does that taste like?” It’s kind of living in curiosity instead of when you block curiosity, that’s when you have the uprising. That’s when there’s disagreements instead of yes, and-ing, and maybe trying it.

April (06:07):
The first word that came to my mind was fun. I would probably classify it more like art.

April (06:17):
Yeah. There’s not really perfection in it. Every stroke has meaning, but it’s playful. We make happy little trees together, right?

Richard (06:35):
All right. And anything else about art or fun as that team went?

April (06:40):
I would say that it was fun because there was high-level support with one another. We dabbled in the pairing very early on with all different roles. When I was on the team, I wasn’t a coach or anything like that. I was more of a tech writer and analyst early on in the space, when people were so afraid. Like hey, you know what? Are we going away? Instead of embracing it and exploring like oh, what can we learn from this? And we definitely saw the world of technology change in, probably for me, I was up and coming and getting rid of printed documentation, and exploring delivering that value in new ways, and making things more intuitive, and so that less is more. And not having value on how large a book of words you can create, and more so on how you can make this experience intuitive and provide help along the way if needed.

April (08:05):
Well one of the things, people were happy. The team was happy, the customers were happy. Again, I said there wasn’t drama. We felt comfortable experimenting. We completely owned how we worked. We were really self-organizing in the way that other teams struggled to be, and to figure out right away to say, “Hey, we own this. We own how we’re working,” and gradually improving our technical practice as well, pairing very early on, even though for some it was hard, and for some it wasn’t a good fit. They literally left immediately. I remember a new guy out of college joined the team, and he never came back from lunch because we were [crosstalk 00:08:49]. And we all just chuckled. We were all like, “Oh, okay.” It didn’t stop us, like oh you’re doing the wrong thing.

April (09:15):
Yes, I’m really going back because this was such a long time ago. This was 2007, so I’m dating myself. I’m not saying there’s not great teams, we were just naturally that way. And really, I’d never read the agile manifesto when I was on that team. It wasn’t until afterwards, “Oh, that stuff sinks in.” We kind of really began there.

April (09:36):
There was psychological safety in how we engaged with one another. If you needed help, we were collocated when that was probably a new thing. It was probably more of pod environments at that time. And we didn’t have many meetings at all, because we just worked alongside each other. We didn’t have the ceremony of what you see things today, aside from making sure we had reviews with our customers and everyone else. And I would say that it was wonderful that the attendees, real customers were there, not physically but on the phone and throughout the organization and support and everything. They were there, and they were all really excited about it, so we felt we were doing something right. And they were excited about what was coming next, so it was like a real demo and review, where it was an authentic conversation and making positive improvements that the customers really wanted.

April (10:48):
And we did have stand ups. There was a point in time where we had a [inaudible 00:10:53] separate space, and we brought it to our team space. But I remember, I would always stand. And sometimes people would sit down, [inaudible 00:10:59] taking long, and I would stand, and people started modeling me. They were like, “Oh, April’s pregnant. I could probably stand up too.” [inaudible 00:11:08] hilarious. So just an attentive team to one another.

April (11:14):
High transparency as a team. We collocated, we paired, we didn’t really have a language for different things. We didn’t care about all the other stuff. Again, I just say we were in a highly experimental mindset naturally. It felt very autonomous and self-organizing, and comfortable being in that space, not second guessing if we had authority to make these decisions with one another.

Richard (11:44):
Now how about advice for listeners? What could listeners do to reproduce some of this team’s success?

April (11:59):
Thinking that there’s one way to learn, there’s one way to do it. Throw out the recipe really, and begin experimenting. Figuring out what works. Drill down to the basics, and discover all the rest is just waste, that other people’s formula to get where they are is not necessarily your formula, and that’s okay. So I would say in repeating it, always stay curious and own your own transformation. Know why you’re doing what you’re doing. Because someone said so is not a why. That’s one of the biggest things.

April (12:52):
For me, what I mostly focus on now is continuing down that path of reinventing work and understanding, constantly exploring other ways to add value. I always look at, how do I want to add value next? Right now, my community focus is predominantly in I would say dealing with women in our community, and investing time there, but also looking at other areas as well and trying to understand what I call nurture people’s journey to nourish theirself. And that’s the biggest thing, is that when you walk in a mindset of owning your journey, you understand that there’s two things you control. You can control your own behaviors and your own thoughts, and that really changes everything. And with that ownership that is quite powerful, you can actually achieve some of the most unlikely things. And teams are constantly forming around you as well. I see myself as a serial collaborator. I’m always collaborating, and I have so many different projects going on. And you form different teams there with it, and you find beauty in it, and you learn better questions to ask, better things to support the team.

Richard (14:24):
All right. And if listeners want to get in touch with you, is there a way for them to do that?

Richard (14:40):
I always feel a sense of joy when I talk to you, and I feel that right now. Thank you so much for joining us today, I really appreciate it.

Richard (14:58):
Hi, friends. Thanks again for listening. And remember, to support this podcast, visit my website, kasperowski.com. 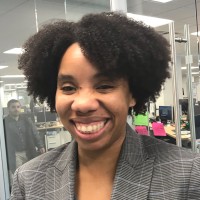