Line up
This is a game with a manager and a bunch of workers. Ask for a volunteer to play manager. The manager’s job is to solve a simple problem without assistance from the workers: sort them into a line by some criterion. 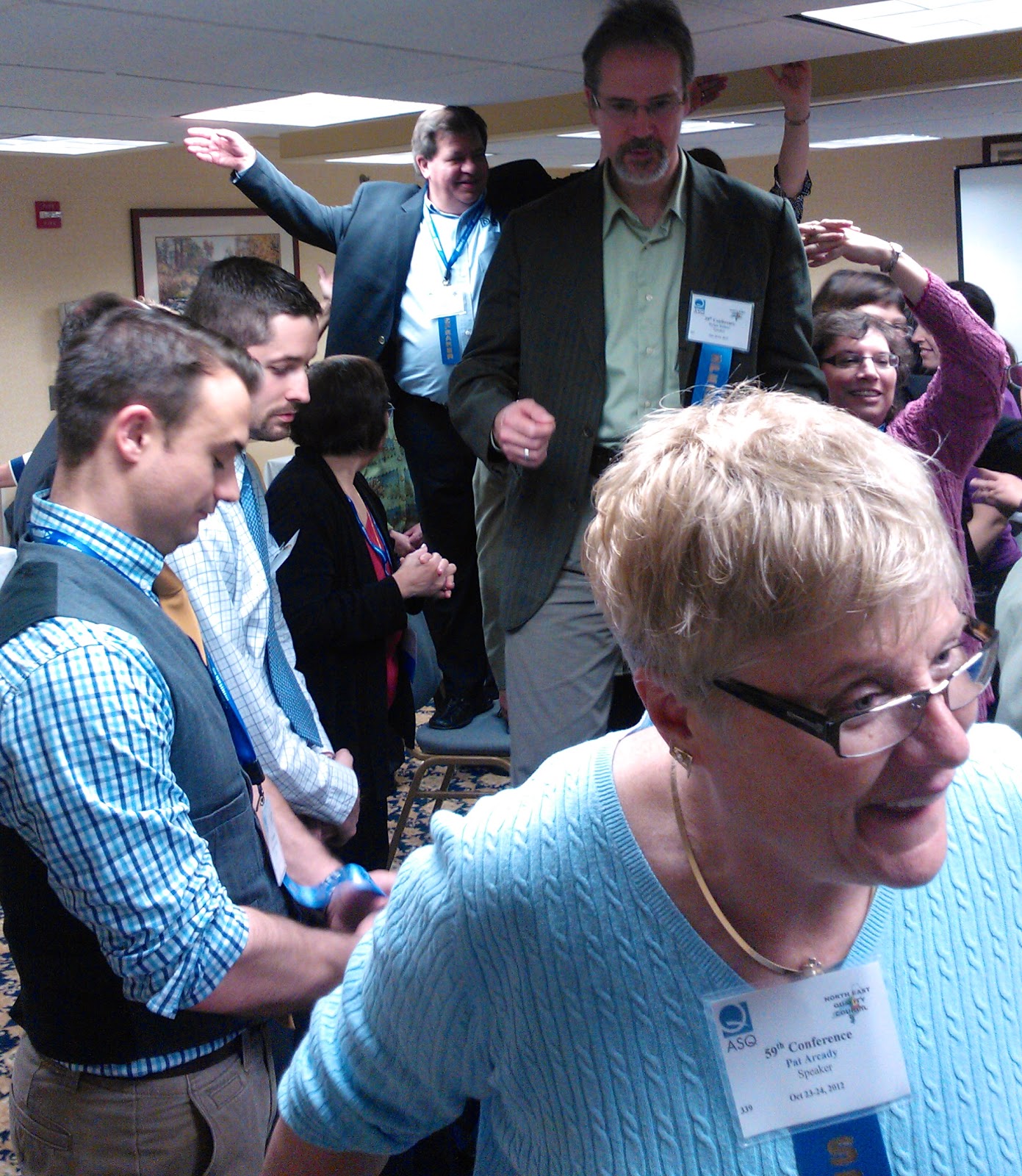 Source: Line Up is documented in Moving Beyond Icebreakers and elsewhere. I first played it with Lysa Adkins at Scrum Gathering Orlando 2010. The idea of a manager commanding the workers in Iteration 1 is my own.

60 paces
The goal of the game is to walk around the room, taking as many steps as possible in two minutes.
Iteration 1: Form pairs. In each pair, one person volunteers to be the manager. The worker can only do what the manager says. The manager can only issue four commands: Go Straight, Stop, Turn Left, and Turn Right. Using a stopwatch, give the pairs two minutes to take as many steps as they can.
Iteration 2: No one is a manager; everyone is a self-managed worker. Self-managed workers, how many steps can you take in two minutes?
Debrief: How many steps did you take in Iteration 1? In Iteration 2? Were you more or less productive in Iteration 1? What was it like to be the manager? The worker? Was it fun?
Source: tastycupcakes.org/2009/06/60-paces/, often credited to Ken Schwaber
Triangles
Iteration 1: Secretly pick two friends. Move around the room so that you and your two friends form the points of an equilateral triangle. Continue until everyone stops moving.
Iteration 2: You are a secret agent. Secretly pick a friend. Secretly pick your friend’s enemy. Your job is protect your friend from his enemy. Shield your friend by standing directly between him and his enemy.  Continue until everyone stops moving.
Debrief: What did that feel like? What would that have been like if you could only move when and where your manager tells you to?
Source: Inspired by the Agile Games 2011 Open Space session on Short Games with Movement. Derived from agilethinking.net/agile2005/TriangleGame.html
Human knot
Everyone stands near each other in the center of the room. Raise your right hand, reach across the group, and hold someone else’s right hand. Raise your left hand, reach across the group, and hold a different person’s left hand. Now everyone is connected in a knot. Unravel the knot into a circle of people.
Debrief: Was that easy or hard? Were there any spontaneous leaders guiding us to untangle? Was this fun? Did we violate any social taboos, was that OK? Does the number of people in the knot make a difference?
Source: Inspired by Agile Games 2011 Open Space session on Short Games with Movement
Human sculpture
The participants are the sculptors and the raw material of a human sculpture. Give them an inspiring theme, and ask them to form themselves into some object or scene.
Debrief: What did that feel like? What is your role in the human sculpture? Why did you choose that role? What was the level of teamwork to be able to produce the sculpture?

Sources and inspiration
Thanks to everyone who inspired these games. Thanks especially to my friends at Nokia in Bangalore for inspiring this collection of games, my friends at Nokia in Burlington for playing with me, the Agile Games conference for introducing me to the power of games at work and for letting me share this collection with everyone, and the NEQC conference for letting me introduce these games to a group of great people.

Fell free to explore and visit the rest of the website.