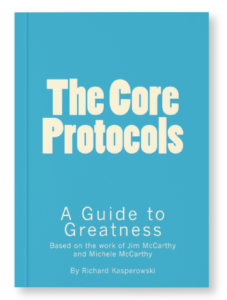 My work with teams builds upon a body of knowledge developed across decades, applying the latest thinking to fundamental and well-tested theories of human behavior within groups. Repeatedly, and in many different settings and industries, the correlation plays out:  High-performing teams require psychological safety. Psychological safety requires emotional intelligence at a team level. And understanding and applying the Core Protocols raises emotional intelligence.

That’s why I teach the Core Protocols as the foundation for growing high-performing teams. But where did they come from in the first place?

To understand this, we need to go back to the 1990s, when Jim and Michele McCarthy were working at Microsoft and Bell Laboratories.  Of course, programming was a very different industry in the last millennium – but human behavior and interaction haven’t changed all that much. Jim quickly noticed big differences in the productivity and performance of different teams within the organization.

Why did some groups solve problems and develop products with apparent effortlessness, while others – containing personnel with similar technical competencies – seem to dissipate their team effectiveness through the way they interacted with each other?  All had ostensibly similar goals, to develop and ship products – but the results varied drastically.  Which specific behaviors and interactions contributed to better collaboration, and ultimately to higher levels of performance?

By observing and modeling what worked, and bringing in Michele to add an innovative team dynamics perspective to his quest for higher performance, Jim and Michele took the Visual C++ team to unprecedented performance heights.  Their work with this group, which took an experimental and iterative approach to creating change, led directly to the Microsoft Solutions Framework – regarded by many as the crucial ancestor of the Agile programming revolution.  But then the McCarthys left to do their own thing, aware that they were looking at something even bigger, which could have potential application far beyond the software development world.

Pursuing a passion to pin down the patterns and protocols which lead to genuine greatness, Jim and Michele McCarthy formed McCarthy Technologies, Inc., and proceeded to study how people worked together in groups.

The McCarthys set up five-day experiments in which teams formed and worked together on an assignment. The McCarthys observed the teams and were able to identify common behaviors and activities which correlated with high performance. They codified these behaviors into what we now know as the Core Protocols.

They shared that information in a GNU General Public License document of deceptive simplicity, providing a framework for transparent, honest, and effective communications within teams. This has gone on to transform the way people get things done and achieve greatness together.

With biases towards openness, positivity, and disclosure, the Core Protocols strip away the superficiality and passive-aggressive communications which are the curse of so many badly-functioning teams. Providing a practical list of commitments and behaviors which get to the heart of what motivates individuals and aligns the work and respects individual needs, the Protocols have broad application, far beyond the workplace – never mind the software development industry.

The McCarthys have produced and shared much of their content freely – including over 100 podcast episodes and the online version of their 2002 book Software for Your Head.

My own work with teams draws directly on the application of the Core Protocols in facilitating optimal performance, through the creation of psychological safety within the group and developing practices related to increasing emotional intelligence.