High Performance and Productivity at Tesla 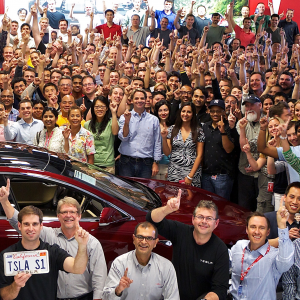 Most people don’t want internal memos leaked and made public, but if you are the iconic figurehead of a ground-breaking innovator like Tesla, you probably expect to have your every word scrutinized and poured over. So we’re not the only ones fascinated by the productivity advice sent by Elon Musk to his colleagues in April. Musk laid out a number of changes intended to increase production of the Model 3 while at the same time boosting profits.

Quite a few of Musk’s points caught my attention in relation to my work in studying high-performance teams. Some elements of Musk’s approach resonated with me, while others were jarring.

It’s strange, for example, how often there seems to be some a trade-off between productivity and human connection. The human elements seemed expendable in the name of ever greater efficiencies. He talked about meetings as the blight of an organization, and exhorted everyone to either cancel all meetings or else “keep them short”—and it’s easy to imagine this being implemented by way of a brusque agenda-driven Chair, who seems not to value understanding how everyone is emotionally. Surely a meeting should be exactly long enough for the connectedness to occur and the business to be done. Meetings are about the team, as much as about the work.

While the Check In protocol sounds off-limits at Tesla, many commentators have latched onto is this passage from the leaked email:

“Walk out of a meeting or drop off a call as soon as it is obvious you aren’t adding value. It is not rude to leave, it is rude to make someone stay and waste their time.”

This will, of course, make my regular readers or workshop graduates smile, because—you’ve got it—Elon Musk just reinvented the Check Out protocol!

Anyone working with the Core Protocols will be familiar with this behavior, but it was fascinating to see that this remark got so much attention and reaction. Forget raising productivity 3x—Musk wants people to walk out of meetings…? Business Insider could barely believe it, and had to hedge around misunderstanding with the headline, “Elon Musk reportedly tells Tesla employees that they should just leave meetings or hang up the phone if it’s not productive” (my italics)—because he can’t mean just, you know … walk away, right?

All sorts of commentators have weighed in on this, not just the business media. It’s a reminder of how much organizational cultures vary and how levels of team emotional intelligence within those organizations vary, too.

The reason so many people find it shocking to imagine walking out of a meeting is that it would not be psychologically safe to do so within their workplace.

This needs examining. If you genuinely do not have the level of trust and understanding where you can decide there are better ways to use your time, then your time is probably not being used well. Neither is your attention and concentration, if you are having to waste it speculating on how other people will react, what you can get away with, how you’re being perceived, or whether you’ll get judged or called out or shamed merely for doing your job the best way possible. And there are ways to exit a space with grace and courtesy but without disruption, which are easy to agree on in advance—like the Check Out protocol.

So why not have a chat about this with your team and see how everyone feels? It could be an excellent opportunity to experiment with the Core Protocols and see how it goes.

Meanwhile, Musk had a number of other good suggestions which could positively enhance the effectiveness of your team, including direct communication across departments and cutting through the “chain of command.” The term “chain of command” might strike members of self-organized teams and flattened hierarchies as deliciously anachronistic, but remember that Tesla is a manufacturing business employing thousands of people in multiple locations, and as such communication can get siloed and constrained.

So it’s good that the CEO has specifically called out that it’s OK, indeed it’s encouraged, to take your question or idea straight to the right person—because clear communications are so critical to high performance.

Musk also encouraged employees to share new ideas directly and efficiently. He provided an email address that anyone in the company can use to send ideas straight to the top. I’m not sure if this means there is a problem with surfacing and refining emails within individual teams, but it does help create a safety net to ensure more gems are caught.

And he encouraged a pragmatic approach to using common sense versus following the rulebook: “If following a ‘company rule’ is obviously ridiculous in a particular situation, such that it would make for a great Dilbert cartoon, then the rule should change.” This is good self-organizing and agile thinking, which encourages initiative and helps to raise the safety of workers at all levels to use their heads and be creative. And it’s completely aligned with the Core Commitments, especially the one that says, “I will never do anything dumb on purpose.”

Many of us think about these issues within our smaller work teams. It’s exciting and positive to spot examples of emotionally-intelligent leadership at the whole-organization level.